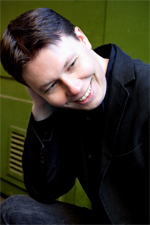 Ola Gjeilo (pronounced Yay-lo) was born in Norway in 1978, and moved to the United States in 2001 to begin his composition studies at the Juilliard School in New York City. Ola’s concert works are performed all over the world, and his debut recording as a pianist-composer, the lyrical crossover album Stone Rose, was released in 2007, followed by its 2012 sequel, Piano Improvisations, both on the 2L label.

Many of Ola’s choral works are featured on the Phoenix Chorale’s CD titled Northern Lights: Choral Works by Ola Gjeilo which is the first recording devoted entirely to his music for choir. The recording was released in 2012 and features the Phoenix Chorale under the direction of Artistic Director Charles Bruffy along with special guests The Harrington String Quartet, saxophonist Ted Belledin, and the composer himself, Ola, on piano. Northern Lights includes five world premiere recordings and three pieces which were either commissioned, composed, or dedicated to the Phoenix Chorale. Click here for more information about this CD.

Mr. Gjeilo (pronounced Yay-lo) has been commissioned by several ensembles, musicians and others worldwide, including Barbara Bonney, Solveig Kringelborn, Atle Sponberg, Philip Brunelle, the Edvard Grieg Society, St. Olaf College, Luther College, Ensemble Mendelssohn, and Chorale Arts Ensemble. His choral music has also been performed by elite choirs including the Kansas City Chorale, Conspirare, World Youth Choir, VocalEssence, Mogens Dahl Chamber Choir, BYU Singers, Norwegian Soloists’ Choir, and the Swedish Broadcasting Corporation’s Radiokoren. After studying for his Bachelor’s Degree at the Norwegian Academy College of Music in Oslo, the Royal College of Music in London, and the Juilliard School in New York, he completed his Master’s Degree in composition at Juilliard in 2006.

His publishers include Walton Music (US), Gehrmans (Sweden), and Musikk-Huset (Norway).  Walton Music became the exclusive publisher of his choral music in 2007 and his scores are distributed by Hal Leonard. Mr. Gjeilo’s first solo piano recording, Stone Rose, was released in 2007 and his latest solo piano recording, Piano Improvisations, are available on Amazon.com and iTunes. Ola Gjeilo was the Phoenix Chorale’s first composer-in-residence during the 2009-10 Season.

He especially enjoys writing music for choir, orchestra/symphonic winds, and the piano, while as a pianist, his main passion is improvisation, either solo or over his own ensemble works. Presently a full-time composer based in the US, Ola is also very interested in film, and his music draws a lot of inspiration from movies and cinematic music.