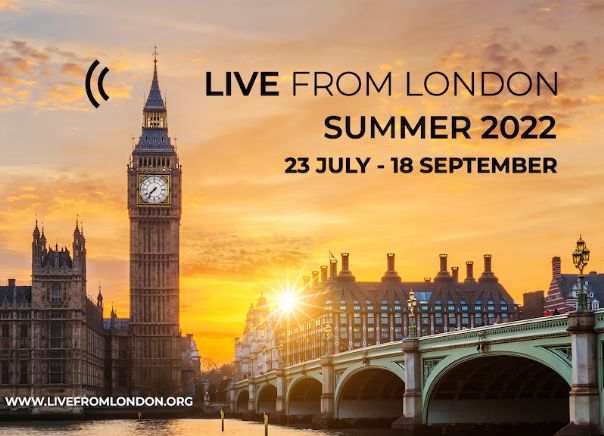 Live From London premieres online from 23 July featuring star soloists and awesome ensembles, filmed in venues across the UK, Europe and the USA.

Phoenix Chorale has been selected by the prestigious VOCES8 Foundation to appear as part of its LIVE From London Festival, running 23rd July into September.

Summer 2020 saw the launch of LIVE From London, the ground-breaking global streaming festival created to connect the world’s top choirs with an online audience at a time when they could not publicly perform, it connects featured choirs with audiences around the world. Due to its overwhelming popularity, the Foundation has produced further Festivals, drawing audiences from every corner of the globe.

Beginning Aug 13 and available online until September 18, LIVE From London will broadcast the Grammy-winning Phoenix Chorale’s concert-for-film, UNCLOUDED DAY. UNCLOUDED DAY was the first event the Chorale performed to a limited audience returning from their pandemic hiatus.

Festival Passes and Individual Concert Tickets can be purchased at https://livefromlondon.org

Filmed by international filmmaker and operatic tenor Andrew Staples, and audio produced and engineered by Grammy-winning Blanton Alspaugh and John Newton in October 2021 at Camelback Bible Church in Paradise Valley AZ, the concert film also features loving shots of Phoenix’s urban and natural landscape, as well as documentary footage of members of the Chorale and audience members as they reflect on the return to live music.

The music featured at this emotional musical reunion was designed to remind the viewer why the art of choral music is so loved by millions. The Chorale presents some of the most well-known American choral compositions from recent times, together with
provocative and nurturing miniatures from contemporary composers. The centerpiece is Benjamin Britten’s greatest choral composition, Hymn to St Cecilia, in praise of music’s patron saint. And, in honor of our American origins, we present three American songs rooted in the folksong tradition, to remind us of the primary reason we all sing — everybody loves a good melody.

The texts are rooted in hope and acceptance, containing uplifting and joyful themes alongside quiet contemplation. We hear that “patience can obtain everything” — something which has been often in short supply in recent times, which, if only we can
live in it, brings acceptance.

Says Christopher Gabbitas “It is thrilling that Phoenix Chorale has been chosen to be part of the latest incarnation of Live from London – surely the pre-eminent online choral festival. We are honored to have our voices joining the throng of singers who have
already appeared as part of the series, and delighted that we have this opportunity to reach a global audience and share our craft, as we continue to promote and advocate for the best that American choral music has to offer the world.”

Festival Passes and Individual Concert Tickets can be purchased at https://livefromlondon.org

___
More about Live from London Festival:
‘Super-Choral, Super-Excellent’ aptly describes The VOCES8 Foundation’s seventh LIVE From London which is sure to set your summer soul soaring. From Apollo5 and Fraser Wilson’s world premiere opening, Invocations, the festival features artists and sound
worlds from South Africa to Scotland, Phoenix to Portugal.

VOCES8 shares its summer touring exclusively with LFL audiences in a series of tracks filmed from across Europe. ‘Super-Excellent’ polychoral glory shines bright from a multi-choir I Fagiolini at St Martin-in-the-Fields, as too does Chineke! Voices making its
debut concert showcasing works by Portuguese Renaissance composer Vicente Lusitano. In honour of Vaughan Williams’s 150th anniversary VOCES8 is joined by its VOCES8 Scholars to perform his Mass in G Minor from the gilded arches of Milton Abbey. Debut artists include: Grammy Award-winning Phoenix Chorale, and South African choir the TUKS Camerata which performs alongside VOCES8 from Christ Church Spitalfields. This summer edition showcases four concerts from the 2021 Oxford Chamber Music Festival ‘Transcendence’ in LIVE From Oxford, including ‘Transfigured Love’, a spell-binding recital featuring Ian Bostridge and Julius Drake alongside OCMF Artistic Director and violinist Priya Mitchell performing songs by Beethoven, Pärt, Schubert and Schumann. Other concerts in the LIVE From Oxford series include soloists Hugo Ticciati, Matthew Barley and Sukhwinder ‘Pinky-Ji’ Singh.

Our joyous summer season is filmed live with audiences, and features stunning venues from across the UK, Europe and the USA. The VOCES8 Foundation and LIVE From London continue to support other artists, arts organisations, education, community and diversity work around the world.